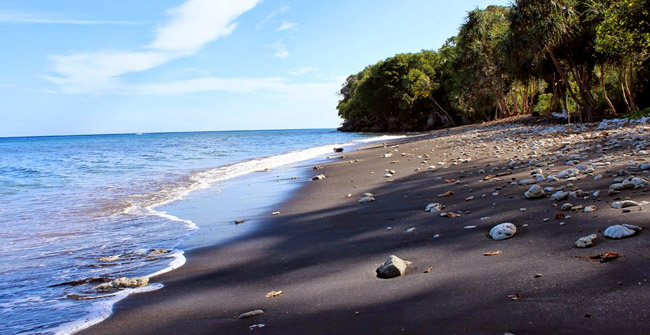 When travelers are talking about Sabang City and Weh Island of Aceh Province Indonesia, they may discuss several beautiful beaches that reside there. One of them is called Anai Itam Beach. As the name suggests, it is located in Anoe Itam Village and belongs to Sukajaya Sub-District. In terms of name, it has the meaning of “Pasir Hitam” (Black Sand). The locals gave the name as the beach features black sand instead of the white one. In fact, it becomes the only beach with such black sand (as compared to other beaches in Sabang City).

The Nuance
There is a unique characteristic of Anai Itam Beach, which is related to the density of the sand. It is said it is three-times of that of other beaches’ black sand. The reason is none other than the high amount of nickel content in it. Also, the most noticeable feature of the beach is the presence of limestone that scatters all over the coastline. It has the contrast color as compared to the sand indeed. Still, such combination looks exotic and unique! When it comes to the sea, it has the color of blue (featuring moderate waves and strong wind). Even dense trees grow near to the beach, creating a comfy nuance. On the horizon, tourists can see the beautiful scenery of Seulawah Mountain as well.

Exploring Anai Itam Beach
The good thing is that tourists can enjoy the trip when heading to Anai Itam Beach. It is because they need to pass through Sumur Tiga Beach before reaching the location. Despite the challenging road, the views of nature may accompany them during the trip. In this case, make sure to rest a while and take pictures of such panorama before continuing the journey. Later, once arriving at the site, they can have more interesting objects to capture. These include the black sand of the beach and limestone!

It is, without a doubt, Anai Itam Beach is known for its black exotic sand. Visitors should know more about the sand, though. In terms of characteristics, it is similar to that of volcanic sand. According to the locals, the sand comes from the active volcano that resides in Weh Island. Well, there is no evidence regarding such statement, though. What tourists know is that they can take advantage of such beautiful landscape to spend a good holiday with families.

Beach walking becomes the most popular activity to do in Anai Itam Beach. It is because visitors can get a different experience while walking on such unique sand. Unlike white soft-textured sand, this one has bigger granules so it feels tickling when you walk on it barefoot. Interested?

How to Get There
For those coming from Sabang City in Indonesia, they need to take a local transportation service and head to Sukajaya Sub-District. Next, they must visit Anoe Itam Village and reach the beach afterward. The whole trip may take about 20 minutes, as the distance is 10.3 km. As for the best route, it is none other than Ujung Kareung Street.