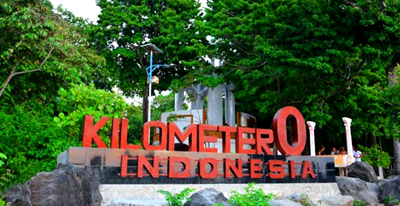 In Sukakarya Sub-District, Iboih Beach indeed becomes the most popular vacation destination for tourists to visit. However, other attractions reside there including the famous Nol Kilometer Monument. It is located in Iboih Village and becomes a perfect background for photography! In terms of function, the monument acts as a geographic marker and symbolizes the unity of people in Indonesia. Not to mention it represents Sabang City as the westernmost region of the nation. Somehow, it also becomes a place to learn history for both local and foreign tourists.

The Nuance
In terms of size, Nol Kilometer Monument in Indonesia has the height of 22.5 meters and it applies the shape of a lined circle. The color of the building is white and it has a “Garuda” statue on it! The statue holds a zero number featuring a black marble inscription that states the geographic position of the building. When it comes to the nuance, the monument is surrounded by several trees and a small park. Thus, visitors would feel comfortable when exploring the site regardless of the time of visit. Here is an interesting fact. The monument has the twin that resides in Merauke City, Papua Province!

Exploring Nol Kilometer Monument
Once arriving at the monument, visitors can gather information regarding the history of the site. It is said the building was inaugurated by Vice President of Indonesia (Try Sutrisno) on 1997. Due to its historical value, all visitors should not spoil the environment or cause damages to the facilities. Even littering is highly prohibited on the site. Those who carry snacks or drinks should take care of the trash, as well.

During exploration, visitors are allowed to take pictures of the monument (both in exterior and interior). In the first floor, tourists may find a round-shaped pillar and an inscription of the inauguration of the monument. It even comes with the signature of the vice president. The next destination is definitely the second floor. On this site, visitors may find two inscriptions. The first one comes with the signature of BJ Habibie, while the second inscription tells the exact geographic location of the site.

It is true that Nol Kilometer Monument has become one of the most significant tourist attractions in Sabang City. Due to its popularity, the local government even has built several facilities like a park, parking area, toilets, trash cans, etc. The purpose is none other than to accommodate visitors. In fact, in front of the monument, tourists can find some vendors who sell souvenirs and snacks. Even a coffee stall is available near to the site!

How to Get There
The prime checkpoint is Sabang City. From there, travelers should take a local transportation service and head to Sukakarya Sub-District. Next, they must visit Iboih Village where the monument resides. The whole trip may take about 40 minutes, as the distance is 21.8 km actually. It can even be faster if they take Cut Nyak Dien Street.