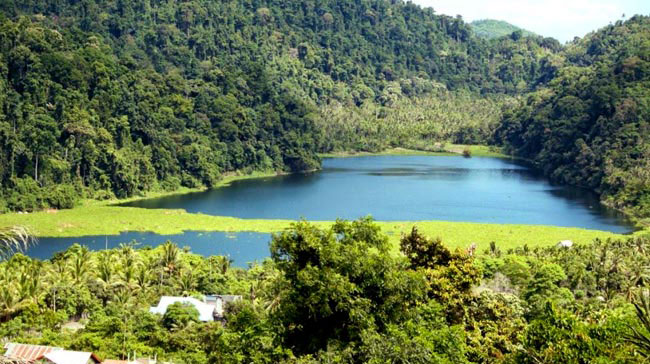 One of the most popular attractions in Weh Island or Sabang Regency is Aneuk Laot Lake. As the name implies, it is located in Aneuk Laot Sub-District and has become a significant feature of the region. Not only it becomes a lure for tourists, but the lake owns an important role to the locals (being the source of clean water for the people). Plus, people are interested to come to the site in order to learn the history of the lake. Even the locals pass the legend of the lake to their kids and visitors!

The Nuance
Of all natural attractions in Sabang Regency, Aneuk Laot Lake is indeed a significant one. The lake has the size of about 37.5 hectares and it features amazing natural landscape as well. Surrounded by lush green trees, the site emits a comfortable and a shady atmosphere. In terms of nuance, it feels peaceful due to the pristine environment. Not to mention the water looks clean and refreshing! What is more? The next interesting feature is the scenery of volcanic fumes on the horizon. Later, in the afternoon, people can see stunning sunset too.

Exploring Aneuk Laut Lake
According to the locals, the most recommended time to visit the lake is during the full moon. It is because the nuance feels calmer and the lake emits its best beauty. The reflection of the moon is seen on the surface of the lake and the sparkling lights of Sabang City accompany tourists on the site! Such romantic atmosphere is indeed both relaxing and soothing. As an alternative, tourists can visit the lake in the morning in order to feel the fresher air and more serene nuance.

Aside from sightseeing, people come to Aneuk Laut Lake in order to enjoy photography. Thanks to the pristine environment and beautiful landscape. Visitors can take some good pictures when exploring the lake later. As for the tips, it is better to come during the good weather. Otherwise, they are not able to explore the site and take photos comfortably. It is also recommended to hire a tour guide as he can help tourists to find the best spot to do photography. Have no worries. It doesn’t cost much money to get such kind of service.

Another interesting allure of Aneuk Laut Lake is none other than the legend. It is said a woman begged the god to provide fertility to the village. Due to her sincerity, the god granted it! However, big rains and earthquake occurred during the process. As for the effect, a big lake was created due to such natural disaster. Still, the land became fertile and more beneficial to the locals!

How to Get There
From Sabang City, a trip to Aneuk Laot Lake takes only about 15 minutes. It is because the distance is 4.1 km. As for the best route, tourists should take Cut Nyak Dien Street to get to the location fast. Have no worries. It would be a comfortable and short trip.